Paintings of Ushguli, Tusheti, the Rio Grande and the Sangro di Christo Mountains by Lin Medlin

The first time I saw photos of the villages of Ushguli, I knew it was a place I had to paint.  Any one of its ninth to twelfth centuries towers, if found almost anyplace else, would be a treasured relic of a lost era.  But high in Upper Svanetti in the Republic of Georgia, these survivors crowd together, taken for granted.

Each tower was once both a family’s private fortress and the treasury of its heirlooms and meager wealth.  They are in no way museum artifacts, but rather still-used structures in a community that has never died, despite centuries of invasion and fratricidal battle.  Out their small windows loom the Caucasus mountains, with Russia a few miles away.  When there, you are in the highest continually occupied place in Europe—if that part of Eurasia can even be called Europe.  The spectacular surroundings both dwarf and accentuate the medieval towers, reminding us how ephemeral even our enduring works are when set against Earth’s monumental beauty.

I believe much of my response to the landscapes of Ushguli registers at a level below my conscious mind, in the realms of forgotten memories and archetypes.   Through the composing, the drawing of forms, the selection of color and the omission, inclusion or emphasis of content, I am probing in these paintings what makes these vistas so compelling to me personally.  I am exploring within myself the feelings their symbol-crowded views evoke, and trying to convey that response to others.

The painting of the Citadel of the village of Omalo is from a different part of Georgia, in a highland region called Tusheti, reached by what has been called one of the most dangerous roads in the world. So high is the region and the mountains around it that it is isolated by ice and snow from the rest of Georgia for most of the year, and so cold that almost all of the Tush spend the winters out of the region. Omalo itself, near the borders of Chechnya and Dagestan, is at 7,000 feet. I took the photos for this painting while standing at the edge of a “Sacred Place.”

While my paintings from Ushguli and Tusheti juxtapose human structures against immense, timeless natural beauty, I focus only on the latter in those of the Rio Grande gorge and the mountain landscapes of the Sangro di Christo range. These are images of particular places at specific times, but images in which the elements have been transmuted, having been seen and recorded through the lens of my own thoughts, fears, recollections and hopes.

The Rio Grande images are from the river below where the Pecos flows into it, a long stretch where cliffs limit our horizons on either side, and for mile after mile there is no sign of humans. Those towering walls to your left and right drive home the same message as the mountains encircling Ushguli and Tusheti. You are passing through desperate beauty existing beyond the human calendar, and for your short passage of time should listen keenly to all the harmonies of sky, water, and sculpted rock. The Sacred Mountain of the Taos Indians, as captured from behind the historic Mable Dodge house, is part of that same conversation between human perception, always confined in a single brief blink of nature’s eye, and geological formations with their vastly different frame of measurement. So too is the mountain vista from near Westcliffe, Colorado, with its constellations of clouds that are white and purple in the early light. Again the paintings seek to share essences of these landscapes and my own responses to them.    Lin Medlin, 2017 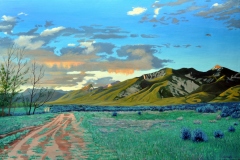